The acute presentation of pregnant women to non-maternity emergency departments

Each year, there are audits to assess maternal and foetal outcomes across the UK.  In 2016-18, 217 women died during or up to six weeks after pregnancy, from causes associated with their pregnancy, among 2,235,159 women giving birth in the UK.  9.7 women per 100,000 died during pregnancy or up to six weeks after childbirth or the end of pregnancy. There was an increase in the overall maternal death rate in the UK between 2013-15 and 2016- 18. Assessors judged that 29% of women who died had good care. However, improvements in care which may have made a difference to the outcome were identified for 51% of women who died.  Birmingham has a higher than average maternal and foetal death rate.  This dataset includes detailed information about the reasons pregnant women seek acute care, and their care pathways and outcomes. 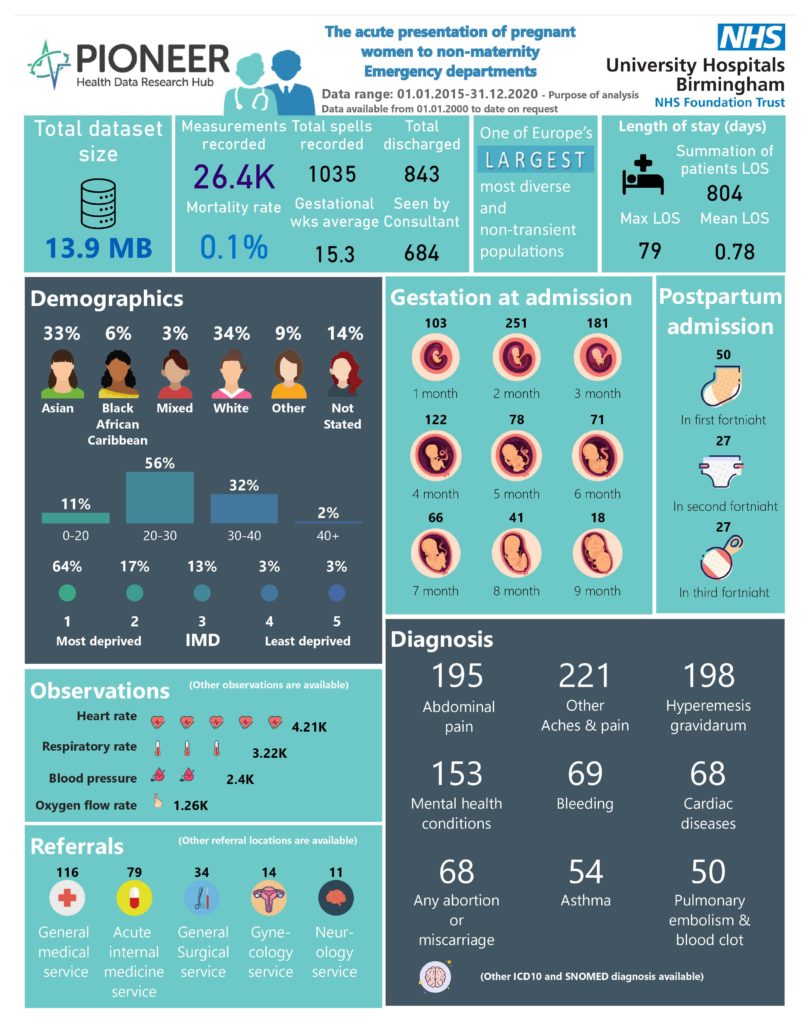 The West Midlands has a population of 5.9million and includes a diverse ethnic, socio-economic mix. There is a higher than average percentage of minority ethnic groups. The region has the youngest population in the UK with a higher than average birth rate. There are particularly high rates of physical inactivity, obesity, smoking and diabetes. 51.2% of babies born in Birmingham have at least one parent born outside of the UK, compared with 34.7% for England. Each day more than 100,000 people are treated in hospital, see their GP or are cared for by the NHS.

Pregnant or post-partum women from 2015 onwards who attended A&E at the Queen Elizabeth Hospital Birmingham. Longitudinal and individually linked, so that the preceding and subsequent health journey can be mapped and healthcare utilisation prior to and after admission understood. The dataset includes highly granular patient demographics (including gestation and postpartum period), co-morbidities taken from ICD-10 & SNOMED-CT codes. Serial, structured data pertaining to process of care (admissions, wards, practitioner changes and discharge outcomes), presenting complaints, physiology readings (temperature, blood pressure, NEWS2, SEWS, AVPU), referrals, all prescribed and administered treatments and all outcomes.

Follow the link below to begin your data request journey

This website uses cookies so that we can provide you with the best user experience possible. Cookie information is stored in your browser and performs functions such as recognising you when you return to our website and helping our team to understand which sections of the website you find most interesting and useful.

Strictly Necessary Cookie should be enabled at all times so that we can save your preferences for cookie settings.

If you disable this cookie, we will not be able to save your preferences. This means that every time you visit this website you will need to enable or disable cookies again.

This website uses Google Analytics to collect anonymous information such as the number of visitors to the site, and the most popular pages.

Please enable Strictly Necessary Cookies first so that we can save your preferences!